Latvia, officially the Republic of Latvia, is a country in the Baltic region of Northern Europe.It is bordered to the north by Estonia, to the south by Lithuania, to the east by the Russian Federation, to the southeast by Belarus, and shares maritime borders to the west with Sweden.

Latvia is one of the least populous and least densely populated countries of the European Union.The official language is Latvian and the currency is called Lats (Ls). The country has a temperate seasonal climate.

The Latvians are Baltic people, culturally related to the Lithuanians. The peaceful “Singing Revolution” between 1987 and 1991 and “Baltic Chain” demonstration on August 23, 1989 led to the independence of the Baltic States. It is part of the Schengen Area. Latvia is divided into four regions 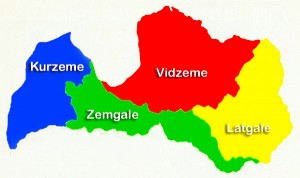 They are named after tribes that one dominated the respective areas.Latvia is distinguished by rolling plains and modest hills; the highest, Gaizinkalns, is 311 meters. Latvia has vast forests.Population: 2,3 million;

Climate: Temperate climate, but with considerable temperature variations. Summer is warm with mild weather in spring and autumn. Summer sunshine may be 9 hours per day. July’s the warmest Month, which temperatures reaching higher then mid 20’s; winter which lasts from November To midmarch, can be extremely cold reaching -10° to -20°C on occasions. The coldest month Is February averaging -10°C (0°C (32°F)). Rainfall is distributed throughout the year with heaviest in August. Snowfalls are common in winter months as is ice cover.

Latvians Most Commentators, groping to pin the Latvians down, have tended to describe the national character as an average of the Lithuanian and Estonian characters; that’s to say, emotional in some ways like the Lithuanians and yet, in certain situations, cool and relentlessly rational like the Estonians. Latvians can seem a little more easy –going and open hearted than Estonians. Although the younger generation of Latvians are indistinguishable from their West European counterparts.

Telecommunications The dial code is +371 plus number.Wireless Internet or WiFi has become readily available in Riga. There are more than 100 spots where You can just turn on your computer and log on.

Economic On the economic front the country’s policy has taken a complete U-Turn from the state owned enterprise to up to a 100 percent private participation. Privatization of complete set-up including 98 percent of medium and small sized corporations baring some capital and sensitive large establishments has bee n achieved. This change overhas brought rich returns for the private sector as well as overall performance of the economy in achieving a more efficient and productive economic performance. Private sector today amounts to 70 percent of national GDP. Parts of Latvia’s infrastructure have been brought from deep obsolescence 20 years ago to being among the best today (Latvia has the sixth fastest internet in the world). Since year 2000 the Baltic state has been the fastest growing EU economies and is driven by consumption. In 2008–10 global slowdown hit this Baltic state and it was one of the EU nations where the impact was quite widespread, but walk has been quite rapid and since 2011 a fair level of stabilization has been achieved on the economic front with a shift to export-orientated development of industry. The GDP growth was 5,5% in 2011 and 6,8% in first quarter 2012 which is the fastest growing among the Baltic states (in Lithuania and Estonia–3,9%). Latvia is at the 21st place in “Ease of Doing Business “ rank in the world (Estonia–at 24th and Lithuania–at 27th).

The Euro The Latvian government aims to integrate the country’s local currency within the European Union’s premise and convert the system into Euro by the year 2014. This is expected to drive in richer results in economic perspective as the country is part of single market bloc.